Book Is Helping to Fund 9/11 Scholarship 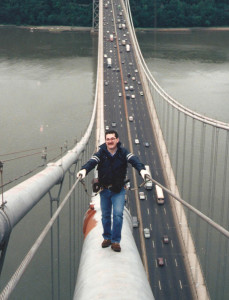 On September 11, 2001, Franco Lalama lost his life after leading the evacuation of engineering offices on the 64th floor of One World Trade Center. Now, the friends and family of Mr. Lalama, along with Ken Budd, author of The Voluntourist, are nearing their goal to create a scholarship in his name that will help people to volunteer with Cross-Cultural Solutions.

Mr. Lalama (right) was a Port Authority of New York and New Jersey employee. Just as Mr. Lalama dedicated his life to building bridges, the scholarship will help volunteers to build bridges with people from other cultures. The fundraising requirement is $10,000. The current total is $6,300, thanks to money from The Voluntourist and Mr. Lalama’s family. To contribute to the scholarship, please contact Cassandra Tomkin at 914-632-0022, Cassandra@crossculturalsolutions.org. You can read Mr. Lalama’s story here.

Ken became friends with Mr. Lalama’s stepdaughter and her future husband through their volunteer experiences in San Carlos, Costa Rica, as recounted in The Voluntourist. The book won silver in the 2012 North American Travel Journalists Association (NATJA) awards and the 2013 Nautilus book awards; an adaptation won gold from NATJA and the Society of American Travel Writers in 2014. Ken is donating his earnings from The Voluntourist to the places and organizations where he volunteered. You can follow him on Facebook and Twitter: @Ken_Budd.