The Voluntourist has won silver in the Nautilus Book Awards, for books that “inspire and connect our lives as individuals, communities and global citizens.” Previous Nautilus winners include such diverse figures as the Dalai Lama, Desmond Tutu, Barbara Kingsolver, and Dr. Andrew Weil. Winners will officially be announced in May.

The Voluntourist won silver in January in the North American Travel Journalist Association awards, and was recently nominated for the 2013 Library of Virginia Literary Awards. All of author Ken Budd’s earnings are going back to the places and organizations where he volunteered. 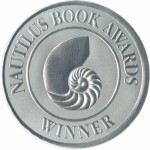