The title of the essay says it all: “Can Voluntourism Bring About, You Know… World Peace?”

In a new piece for FrayedPassport.com, Ken Budd takes a serious yet humorous look at the cultural interactions that occur on voluntourism trips, and how they change the way that people view one another. “When you work with strangers—when you eat together, drink together, laugh, sweat, sing, debate—they’re no longer strangers,” Ken writes. “They’re real people, not newscast stereotypes. And misconceptions slowly die.”

The piece focuses heavily on his experiences in China and particularly Palestine, both of which are featured in The Voluntourist. The book won silver in the North American Travel Journalists Association’s annual awards in January, and recently was nominated for the 16th annual Library of Virginia Literary Awards (winners will be announced in August). 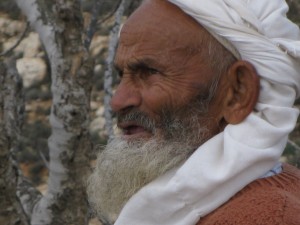 Ken photographed this Palestinian farmer on a volunteer trip in 2009.